The Dracula myth is one of the biggest Hollywoodian creations of the XX century. The Bram Stoker novel, Dracula published in 1897 was transformed by the Americans movies into a universal humanity brand. Everybody knows something about Dracula, about the vampire legends, about the Prince Vlad the Impaler, about his Castle from Transylvania.

And after the publicity starts the business in Transylvania, Romania…

Now we have three castles in Transylvania that are fighting each other for the Drácula heritage. 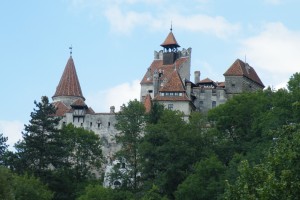 1. The Bran Castle is known like the Dracula Castle by a false publicity, by his proximity to Bucharest, by his beautiful medieval image, etc. Now this general mistake is a truth!

In fact, the Dracula castle imagined by Bram Stoker in his book is situated in Borgo Pass, close to Bistrita city, near the border with Bucovina, into the Carpathian Mountains. Bran Castle is situated at 300 kilometres south from the Bram Stoker Real Dracula Castle.

But the mass-media, the travel companies and the public ignorance made from Bran Castle the most popular tourist attraction from Transylvania – the Dracula Castle.

When you are visiting the Bran Castle from Transylvania you want to see the real Dracula face, the truth story of the Prince Vlad the Impaler and nothing from there reveal this. The Bran Castle has nothing conected with the Count Dracula. Just the market products, souvenirs from outside remember the Dracula tourist attraction. Some tourists are disappointed, others are enthusiastic… 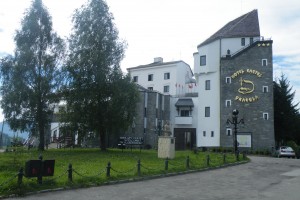 2. We must admit that the tourists from all over the world want a real castle of Dracula. The Romanian Communist Party in the time of Nicolae Ceausescu made one: a hotel in the Borgo Pass. So now we have 2 castles: the commercial castle from Bran and the Communist Dracula Castle from Borgo Pass, in the district of Bistrita-Nasaud.

This hotel – castle is also a commercial attraction without any historical relevance and any architectural style, but situated on the road to Bucovina, into the Borgo Pass like the Bram Stoker book. More than this, the communists made a scary show by improvising a downstairs cellar where you can see the Dracula tomb. In fact, an actor is painted and dressed like the American Dracula icon and attack the tourist by frighten them when the light is unexpectedly closed. In general all the tourists are getting out laughing and smiling. This was the Communist Dracula… 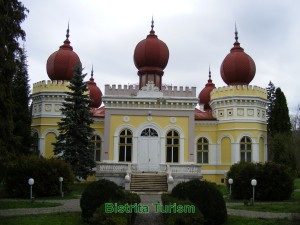 3. The Third Dracula Castle is the Arcalia Castle from the same Bistrita-Nasaud County, known like the Dracula winter Castle. We speak about another legend invented by the local people. How the Transylvanian winter is difficult and the meteorological and transport condition to Borgo Pass are hard, the Arcalia Castle is the closed castle from the Carpathian Mountains. It is situated near the Bistrita city (the town visited by Jonathan Harker in his voyage to the Dracula Castle), at the bourn of the mountains with the filed of Transylvania. This castle less known is an authentic one and is situated in the middle of a deontological park. The Dracula winter castle is build by a strange Hungarian nobleman into the Byzantine style in the XIX century. This Castle is an estate of the University Babes-Bolyai from Cluj-Napoca (the most important Transylvanian University) and here every year is making an aristocratic New Year Party, like the old romantic balls from XIX century that inspired Bram Stoker.

So if you want to find the Real Dracula Castle from Transylvania, you must admit that just in the imagination exists one and for your visit in Transylvania you have three alternatives, pick the one you like best!