Why Romania is a top destination for the African people? 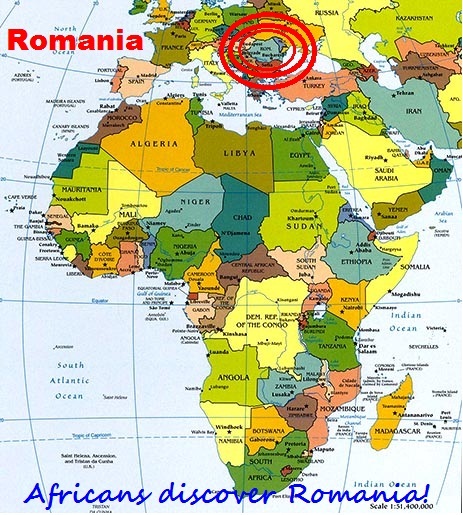 African people, if you want to spend your holiday in Europe, the best tourist destination are Romania. Why?

Romania, how the name is saying is the land of the old Romans, the last eastern province of the Roman Empire. The Romanian people are speaking a language similar to French and the young people are speaking very easy English. So, the African people will not have any problem in communication.

Than in Romania are few black people, so you will not feel discriminated how sometimes is happening in the Western Europe. Romania was one of the first states from Europe that recognize and admit the independence of the African people from the Western Colonial Empires.

In the communist period, Romania was very linked with the African states for the policy of Nicolae Ceausescu who believed that the Romanians should have a different relationship with the African people in harmony, respect, modesty and helping each other.

For this, the image of the Romanians in the entire Africa is not of dominators and colonialists, is the image of the white people that are treating the black people with respect and equality.

Now Romania is part of the European Community and one of the safeties countries of the entire Europe. The Romanian police are very efficient in controlling the immigration, the illegal substances and the terrorism. So, your image here like tourist African people will be at a high level.

The conditions for a visa in Romania are strict, but in the same time it is easy to receive the visa, because Romania has in all the African countries diplomatic missions. In the capital of your country is the Embassy of Romania and from the main airport of your country you have a flight to Bucharest – the capital of Romania, directly or with one stop in Istanbul, Frankfurt, London, Paris, Rome, etc.

Like tourist attractions Romania has all of it: UNESCO world heritage sites; ancient, medieval, modern and postmodern culture; religious attractions; nature and wildlife, parties and entertainment, and snow, a lot of snow.

If you are interesting in a pilgrimage, for example, Romania is the best place to travel. Why? Because, Romania has a religious diversity and historic places for each confession, religion and believe. Here you find in harmony in the same village an orthodox church, a catholic church and a mosque in the south of Romania – Dobruja, or an orthodox church, a catholic church, an evangelic church and a reformat church in Transylvania.

And all this Christian confessions are living in peace and harmony for centuries and in the south the Islamic community is 600 years old.

If you are coming to Romania you must visit:

A. The UNESCO world heritage sites: the painted monasteries from Bucovina – Moldavia, the fortified churches from Transylvania, the wooden churches of Maramures, the medieval town of Sighisoara and the Monastery of Horezu.

D. The ancient Christianity places: the Saint Andrew cave, the Saint John Cassian Cave and the Christians tombs from Constanta.

E. The mosques of Constanta, Babadag and Mangalia, etc.

In conclusion, if you want to be treated like equal in Europe and to explore two thousands years of Christianity come to Romania!