New Year’s Eve Traditions in Transylvania: the little plough and the goat dance 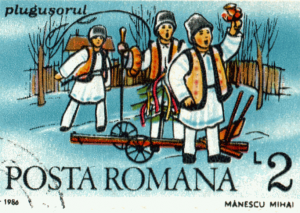 We are continuing the articles about the winter traditions from Transylvania, especially the New Year’s Eve local customs.

After the garlic amulet and the onion calendar traditions at the Queen of Transylvania Embassy Ball from the Dracula Winter Castle in the 31 of December 2015 the guests will meet the „Little plough” song and representation.

This performance, called in Romanian „Pluguşorul” is a mixture of a song and a theatre representation made just by the boys. Similar with the carols home visits a group of children and young boys is visiting the families from the community with a little plough made by wood, bells and a whip in their hands. Once they are received by the hosts, the boys are reciting the little plough song.

The little plough poem is describing the myth of the nation creation: the love story of the Roman Emperor Trajan and the princess Dochia, the daughter of the Dacian King Decebal. In fact, the little plough is a symbolic poem of the nature and the human fertility, a poem of engendering: the boys are wishing to the hosts a good year full of prosperity. 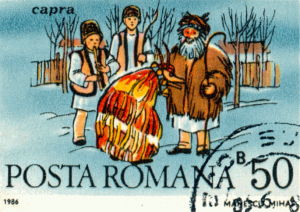 The Goat Dance from Transylvania

The next Romanian tradition presented to the Queen of Transylvania Embassy Ball is the „Goat dance” (in Romanian „Capra”). This performance art is an antique dance from 1,600 BC that reflects the death and rebirth of vegetation. We are in the same old fertility mentality, where the semen – man and the earth – women are giving the next existence: vegetal and human in the same harmonic universe.

The goat dance is a man tradition: a boy is having a specific mask of a goat and is dancing a specific dance; another two boys are singing the story in a dialogical mode. The goat is sold by one of the boys and bought by the other one. In this transaction the goat dies. Then after some incantations the goat is coming back to life.

The boys are performing the goat dance and the little plough representation by visiting all the homes from the community. In this way this traditions are a symbol of unity and spiritual regeneration of the people, the best way to start a new year.

The Queen of Transylvania Embassy Ball from the New Year’s Eve is more than a party; it is the best way to find more about the traditions from Transylvania in just a single event! Come and enjoy it!