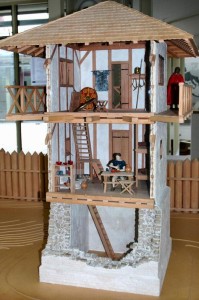 Here were the northern Limes of the Roman Empire, the frontier between the barbarians and the civilization, between the free dacians and the roman colonies, between a free world and the organized society.

Here into a wildlife reserve – the Alac Lake from Zagra (Taul lui Alac) the Golden Krone Transylvania Resort team is rebuilding a roman tower and a dacian house. Our intentions are to give to the modern visitors that are coming to our accommodation from Transylvania the option to a journey into the ancient world of this part of Europe.

Throw the wildness of the lake, the snowed mountains and the pure air the Dacia Felix Reservation is an ideal place for an intrusion into the bottom of the history.

The roman tower from the Zagra limes – Dacia Felix Reservation will give to the tourist a best view to the entire area. In the north the Tibles and Rodna Mountains, in the east and west the Zagra hills, in the south the Transilvanian Field, in front the Alac Lake, and down the Zagra country village. The roman limes tower will recreate the roman soldier’s life. The visitor can sleep into a roman garrison bedroom and eat roman food and drink wine. 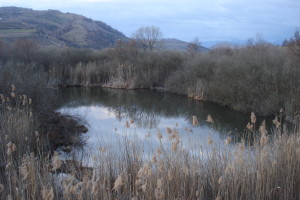 The Alac Lake from Zagra (Taul lui Alac) is the biggest natural reserve of lake turtles (Emys orbicularis) from Romania. Here the wild nature is full conserved and depending of the season the lake vegetation offers his wonderful views. The Zagra Lake is situated on a small plateau formed by some old slides. The Alac Lake has an area of ​​approximately 1800 mp. and an unknown depth; is surrounded by reeds and rushes and the surface floating reed islands. 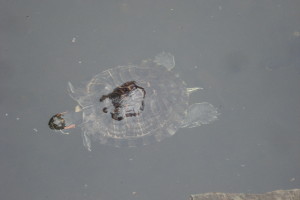 The Transylvanian lake invites you to a mysterious voyage, because is situated on the southern slope of the Treasure hill (Comoara) and are many legends about antic treasures hidden inside. Also the name Alac comes from and old Jewish that had a property here. The legend says that in a hot spring he came here with his oxen for plowing. Because of the heat the oxen have entered into the lake to refresh themselves, but they couldn’t get anymore out from the lake and they drowned here…

To these usual activities the Dacia Felix Reservation will offer special events with ancient life, historical information, and biological exploration to the Zagra Lake and more other attractions.