The “Bethlen” Castle from Arcalia: from Count Dracula to the communists… 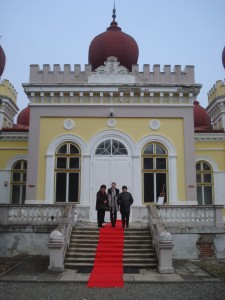 The Bethlen Castle from Arcalia is the strangest castle from Transylvania. First of all is known like the Dracula winter Castle, secondly is the unique castle built in the Byzantine style from Transylvania and thirdly it has survived to the communist historical annihilation.

About the Count Dracula from Transylvania everybody knows something. Here in Transylvania we have Three Dracula Castles: (1) the Bran Castle, (2) the Communist Castle from Borgo Pass and (3) the Winter Castle from Arcalia. Each one has his own attraction: the medieval image at Bran Castle, the communist interpretation at Dracula Hotel Castle and the romantic atmosphere at Arcalia Castle.

The Dracula winter Castle from Arcalia seems to be place of the glamorous Embassy Ball from My Fair Lady movie (1963). It is truth that here each year is a glamorous New Year Party with carriage entrance and well dressed people. But, the romantic side of the Arcalia castle is more than his parties. The botanic park of the castle makes you an extraordinary invitation for meditation, relaxation and old time dreaming.

Here it seems that you are getting out from the time and you go back in the XIX century. An old carriage with a gypsy driver is taking you on the castle park alley; a glass of Champaign is escorting you in your waking and the windswept sound trees are taking you out of time. 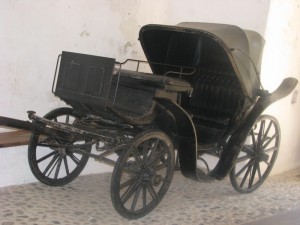 The Dracula winter Castle is a dreaming invitation…

The Dracula Arcalia Castle had survived to the communist annihilation because the Transylvanian University Babes-Bolyai – the most important from the country took the castle from the communist party and transformed it into a biological science center for the students.

Other castles from Transylvania didn’t have so much luck, some of them were destroyed, and others were transformed into animal farms, markets, schools, lunatic hospitals or state headquarters.

What the communists didn’t destroyed, the last 25 years of Romanian democracy did it!

In Transylvania are more than 300 castles and palaces and just 10% of them still having its first utility, others are ruins or state properties.

Welcome to the Dracula Winter Castle from Arcalia!